I also got asked a question this morning about GIF and TIFF files being used to propogate a virus. I've seen people using vulnerabilities associated with, for example, libtiff to do malicious things (or useful things, in the case of the iPhone and PSP), but I don't recall having seen a virus. This surprises me a little when I think about it, as I would have thought it'd be possible to exploit a vulnerability and get it to execute code that's stored in, for example, the comment of a GIF (although with ASLR and other techniques, getting back to this code might be tricky, so perhaps that's why?). Of course, the problems aren't just in the decoders, they're sometimes present in the anti-virus software designed to protect your PC. So it's good to know that there haven't been many problems with image formats in recent years (e.g. WMF at the end of 2005, TIFF in 2006 - PNG in 2007 only appear to be crashes).

comments: 0
She Amazed Me
Tuesday 29th January, 2008 15:46
Far more entertaining than it should be. Inspired from a blog entry by Scott Adams, with music by RIVO DREI and the half decent video by Jem8472 (it'd be better if it had different images each time for the chorus). For more info see http://dilbertblog.typepad.com/the_dilbert_blog/2008/01/she-amazed-me-t.html. I love the final line of the video.

comments: 0
Harry Potter
Saturday 26th January, 2008 18:03
I noticed that Harry Potter and the Prisoner of Azkaban is on ITV1 today, presumably because they think the football will be popular. I have a little crush on Emma Watson (now that she's older - she's 18 in April, and looked great in Harry Potter and the Order of the Phoenix), so it almost makes up for the fact I've been stood up for a date today. Almost. Okay, it doesn't.

comments: 0
Sold Out!
Wednesday 23rd January, 2008 22:34
Nooo, they've sold out of wooden pixel hearts. I hope someone bought me one (I doubt they have, I only came across it this morning). 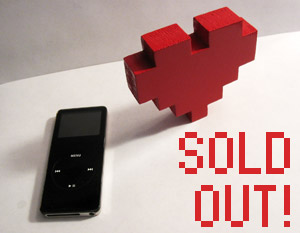 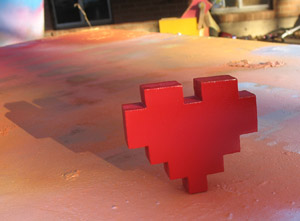 Some higher resolution photos are available here, hopefully they'll be back in stock and you can order them again from there soon.

Anyway, talking of Valentine's Day, here's a Diesel Sweeties comic that starts off well, but ends a bit too weird and geeky. 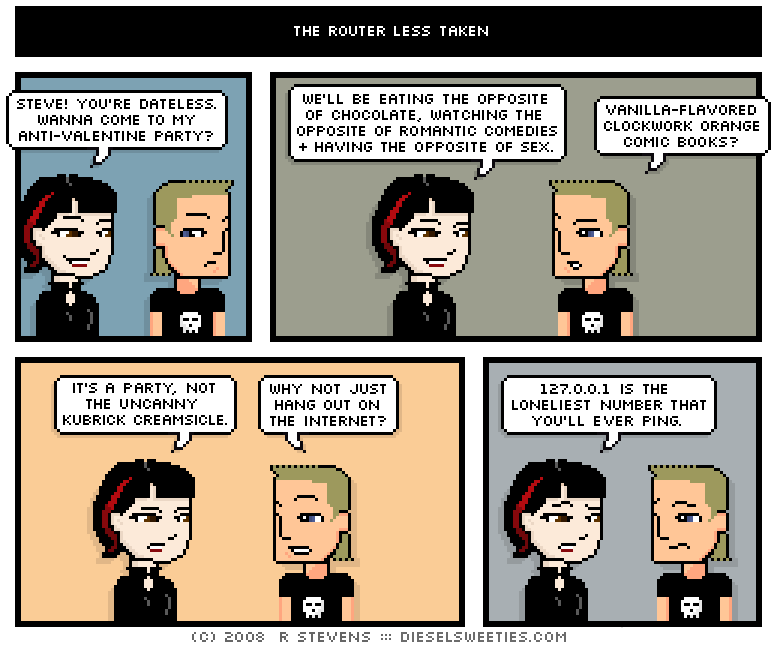 comments: 0
Finally, An Update
Tuesday 22nd January, 2008 16:36
I was listening to Zane Lowe last night and he played TC - Borrowed Time (featuring Sub Focus), which sounded great really loud in my car. Sadly, I was driving in a 40mph section where they were doing roadworks, as it's the type of song I think would sound great at 70mph (or faster, but obviously that would be illegal, so perhaps it's a good job I was driving past speed cameras). And today I had Christina Aguilera - Ain't No Other Man stuck in my head after someone suggested her name (someone asked me "If you could have sex with any famous person who would it be?" and after 24 hours I still can't decide on one person*). And now I'm listening to Electro House Sessions from Ministry of Sound. And drinking some very nice Peruvian coffee. The week's really starting to pick up after a pretty bad start. Hopefully I'll have an absolutely fantastic weekend.

* Some other names that initially came to my mind: Anne Hathaway, Hilarie Burton, Sandra Bullock. Anyone have any more suggestions?

comments: 0
Stupid VMWare Revert Button
Monday 21st January, 2008 03:41
Why did they put the button there? Why don't they prompt you to say "Are you REALLY SURE you want to do that?"? My mouse jumped and I accidentally clicked on the button, making my virtual machine jump back to the last snapshot, which was a few weeks ago. Normally this would be a pain, but I did this at midnight and my exam starts at 9:30. So I've spent the last few hours re-installing everything and copying files from my PC at work (over the internet, very slow) and downloading things all over again. But I think I'm done. Which is good, as my exam starts in less than 6 hours time. Wish me luck, I think I need it.

comments: 0
Even Better
Thursday 17th January, 2008 14:55
I thought my cheese and onion sandwich was yummy earlier this week, but today I've been eating a delicious and spicy chicken fajita wrap that's even better (and not much more expensive).

comments: 0
Annoying
Saturday 5th January, 2008 20:29
One thing that bugs me on The National Lottery is when they press that big button to "start the draw". Because when they switch to the wider angle you can usually see the draw master pressing the switch on the machine that really does start the draw. If you hadn't noticed it before then I'm sorry, because now that you know it'll probably bug you too.

comments: 0
Bad Evening
Saturday 5th January, 2008 16:22
Almost everything went wrong last night. It started off okay when I replaced a power supply with a nice Tagan one (voltages looked better, it ran quieter), although it put up a bit of a fight when I tried to screw it into place (most likely the fault of the case, as I don't remember having any problems with the other 2 Tagan supplies in Lian Li cases). The TV card was also detected, but I'd disconnected the DVD drives and the PC wasn't connected to the internet, so I wasn't able to install drivers for it yet. But it looks like it works okay.

Then I discovered that my parents' widescreen TV only supports 4:3 ratio VGA input, that the component input wasn't behaving properly (couldn't get the TV to display the right resolutions correctly, and most of the time the screen wanted to be blue - I still don't know why). That still leaves trying the HDMI interface sending 720p (which the TV claims to support with its HDMI input), but I don't have an HDMI cable and the ATI HD 2400 Pro graphics card didn't come with the ATI HDMI adaptor (has to be an ATI one to pass the onboard 5.1 audio through correctly, but I can use any DVI-HDMI adapter if I don't mind losing the audio/having to use another cable to hook up the soundcard to the TV). Of course, I can't use the HD 2400 Pro card yet because the card is PCI-E and until I switch the motherboard and CPU across from another system (which won't happen until Intel's new Penryn based chips arrive in about 3 months), the current motherboard only supports AGP. The current motherboard also doesn't support SATA - well it does, but it appears to only present the drive if it's configured as RAID (it may be possible to change that, but it doesn't look like the BIOS supports booting off it anyway, so that's another reason to wait until I switch motherboards) and I only have one big SATA drive, and I don't particularly care about redundancy for a "Media Center" PC. Worst case scenario, a few TV shows are lost.

So I gave up and decided to try my new webcam. It's a Microsoft LifeCam VX-6000 that was on offer at PC World (so the price wasn't bad). It's adjustable, has a built in microphone, and (most importantly) is meant to work on Vista. I had trouble getting the laptop's drive to read the supplied driver CD (it kept thinking it was a blank disk :S) so I plugged the webcam in anyway to see what happened, and Vista (admittedly it was running SP1 RC) has built in support for the latest software/drivers! And it works fine - although I may uninstall the software, as I'm not a fan of the button at automatically offering to start a video conversation, as it's too easy to hit the button when you're moving the cam around with a laptop, but it's probably fine if you're using it with a desktop PC. The image quality looked okay, once I'd focussed it, although I haven't played with it too much. Still, it was a nice ending to a pretty depressing evening.