When Derren was in the studio, he repeatedly told everyone this was the pre-recorded section. He told us that the other parts (when we hear him, but don't exactly see him) were live. He's somewhere in mainland Europe, about to go into an unspecified casino (but doesn't want to reveal where, otherwise someone might be able to prove he's not really there?), despite the fact he doesn't appear to be allowed in most casinos across the world. Assuming that Ben is just a normal person that really did give Derren £5000, and all his reactions were filmed live, this would be the live part of the show. However, what Ben was watching seemed very suspicious to me.

Call me a cynic, but would you really expect to see that much interference on a broadcast? It would certainly help them cut together any pre-recorded sections. Would you also expect to see such a good shot of the table considering Derren shouldn't be able to see what his camera sees? That's assuming this is a real casino, although I'd expect a real one to spot his massive camera (although if they don't, perhaps he managed to smuggle in his electronic equipment to help determine the number for him?).

I also think Derren screwed up on the editing. The stack of 5 x 100 chips that were returned to Derren didn't look consistent in the split screen (perhaps it looked better on Sky or Freeview?). Apologies for the poor quality, but this was taken from the episode on 4oD:

On the top right we can see the top chip has almost slipped off and is to the right of the stack. On the left side it looks like a normal round stack of chips. Even giving him the benefit of the doubt on the left hand side, it still doesn't look correct to me: 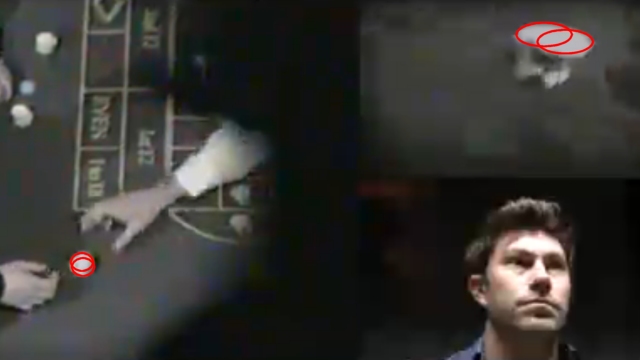 Finally, and this might just be a coincidence, but as Ben walks past the two lorries (25:39 into the show on 4oD) you can clearly see the number 30 on the side of the first lorry, which appears to be in red. The second truck doesn't appear to have one. The number 30 (which is red) is where the ball lands on the roulette wheel. If this isn't a coincidence, then the show was obviously pre-recorded.

I can't admit to spotting the number 30 myself, I read it on a comment on a blog. I also stumbled across a comment that ended with this:

And this made me laugh on a forum too:

Next week I hear he will predict the outcome of the toss of a coin. He might get it wrong, but he'll only be out by one, and prove to us what a true genius he is!