comments: 0
Enough Already!
Wednesday 24th November, 2010 12:54
Earlier this month, William and Kate announced their engagement. The media went nuts (clearly there wasn't much else to talk about) and according to BBC News it won't be long until they're married: 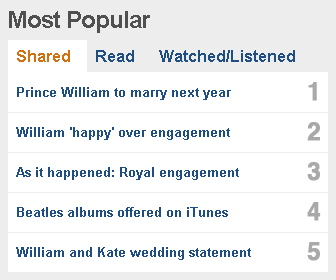 But there was one story that wasn't related to the addition to Her Majesty's family! It seems we can finally listen to The Beatles on our Apple devices. I'm obviously not counting anyone that had ripped their CD collection, or anyone that had illegally downloaded it. That leaves about... 5 people, right?

Actually, it seems that over 2 million individual songs have been downloaded from iTunes. Imagine (okay, so that's a Lennon song) all the money that could have been made if they'd let it be on iTunes a few years ago. Ob-La-Di, Ob-La-Da, life goes on, bra.

I can see why AV companies would be unhappy that Microsoft Security Essentials is presented. But I'm getting a bit annoyed that Microsoft are being forced to unbundle and offer choices to people just because their OS is the most popular. Some of us actually want Windows Media Player pre-installed, rather than downloading the setup file over the internet. Some of us want to use IE (with Protected Mode, SmartScreen Filter etc.), and we don't want to download an optional update and pin the IE symbol back where it was. It's only a matter of time before we have to choose what calculator we use, what text editor we use, what patch management program we want to use (Windows Update is great, but what about something like Shavlik?). I wouldn't be surprised if the comment really does make it into Windows 8.