reply
Listener
Wednesday 27th March, 2013 09:24
I started a listener on a fairly common port on the Internet overnight. This morning I discovered this: Surprisingly few requests really for almost a 24 hour window. Nothing particularly malicious either.

reply
Arsenal Summer Clear-Out
Thursday 21st March, 2013 14:04
There are several (unreliable) rumours about the players Arsenal will be getting rid of over the summer, including this list of nine players. With Nacho Monreal (no, IE10 autocorrect, I didn't mean Montreal) brought into the side in January it's fairly obvious that Andre Santos no longer has a place in the first team (being immediately sent out on loan, with Vermaelen playing somewhat out of position in preference, confirms it), and this would certainly explain why his T-shirt is on offer in the Arsenal Direct online shop (now £5 instead of £16). Slightly surprisingly, there are two other T-shirts that are also down to £5 (again, originally £16). 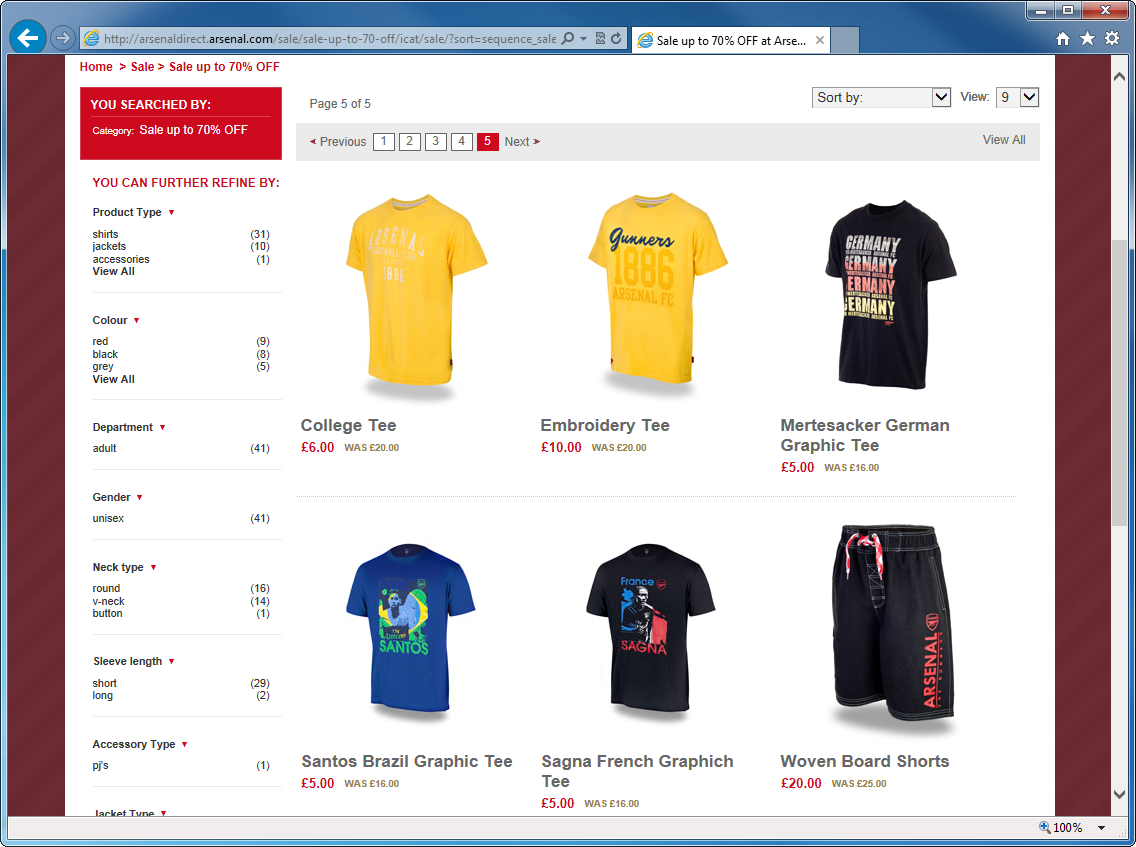 Perhaps the shop is hedging its bets in case Arsenal also offload Mertesacker and Sagna over the summer? I suspect this will depend on whether Arsenal buys another CB or RB to take their place.

There have been a few names mentioned for centre backs, in particular, although how many of them would be an improvement is somewhat questionable (e.g. Fernando Amorrbieta, Ashley Williams, Martin Skrtel, Micah Richards, Joleon Lescott, Adil Rami).

Update: There are rumours that Arsenal might try to buy Loic Remy if QPR are relegated. Coincidentally, I've been playing Edinson Cavani and Loicy Remy up front on Football Manager Handheld (along with Giroud and Walcott - having sold Podolski) and they're basically my two best strikers (hint, hint, Arsene). I've also had success with Gino Peruzzi and Danilo if we're looking for a Sagna replacement, and Julian Draxler's doing well on my left wing. Just saying.

comments: 0
Disaster Recovery
Thursday 21st March, 2013 09:46
For the last few years my Disaster Recovery (DR) server involved me periodically copying data across from the production server. It was a very manual process, which I did very irregularly (I'm lazy, and my production server has been pretty reliable, get over it). In the last few weeks I've made this an almost entirely automated process (using my existing SSL certificates), with everything properly configured, secured and penetration tested (go me!). Okay, so I haven't setup email yet, but that's not a difficult job.

Some people might call me crazy for not having done this from the very start, but I finally changed one of my original DNS servers into a secondary, to match the third DNS server (I originally only had two DNS servers and decided it was easier to tweak the entries on both servers than worry about enabling zone transfers, not that there's anything sensitive on them).

Last night the production server was taken offline so it could be put into a shiny new rack by my friend Chris, which meant I got to try out my DR "process" for real. I'd already changed the DNS entries (on the primary DNS server, the secondary servers did their job picking them up okay) to point at the DR server earlier in the day, and I changed them back first thing this morning (at some point today I'll firewall off the ports to the DR web server again). Everything went smoothly, with three (known and quite acceptable) exceptions: I figured that I'd be asleep so I didn't need to check my email (some may bounce, but the sender should retry, most likely before I'd woken up). I also figured that the handful of people with a login to the site would also be asleep overnight (and, to be honest, you lot rarely log in anyway).

The medium-to-long-term plan is to move to Windows Server 2012 and rely on Hyper-V 3.0 virtualisation (and possibly modify my server/site to use something like active-passive replication) and migrate the VMs between a couple of physical servers (I was thinking of hosting both in LDEX, but perhaps it'd made sense to have them in different racks/locations). When it's done, it'll be quite an overkill setup just to host this blog and my personal email (which I download to my home PCs, so nothing's on here for longer than 24 hours). I probably should do something more useful with it, but it looks like someone already beat me to scanning the Internet.

reply
@RobNicholls81
Monday 18th March, 2013 23:51
"@AnnaKendrick47: A man fixing your computer is the new chopping firewood; makes a lady feel safe and warm. #Swoon" If only this were true!

reply
@RobNicholls81
Sunday 3rd March, 2013 15:53
"@BreakingNewsUK: Queen has been admitted to a hospital in London after experiencing symptoms of gastroenteritis - PA" Nervous about #NLD?

reply
@RobNicholls81
Friday 1st March, 2013 21:37
I find it annoying that XSS and CSRF use inconsistent letters for "cross" #firstworldproblems #blamestylesheets