There's a brilliant simplicity to first-past-the-post.

You walk into a polling booth, put a cross against someone's name, drop the paper in a ballot box - and the person who gets the most votes wins.

That goes out the window with AV.

It's not my job to tell you exactly how the system works - that's for the 'yes' campaign to explain.

But even if it was my job, I'll be honest with you, I don't think I could.

Yes, there's a superficial simplicity in getting people to rank candidates in an order of preference...

...and redistributing votes until someone gets fifty percent.

But it's a lot more complicated than that.

Here's a passage from a book detailing how the Alternative Vote system works:

Do you understand that?

I didn't. And I've read it many times.

And I don't think we should replace a system that everyone gets with one that's only understood by a handful of elites.

Shouldn't I be worried that my Prime Minister doesn't understand how the relatively simple AV system works when he makes hundreds (if not thousands) of complicated decisions? He apparently came bottom in Latin and Maths at Heatherdown, an exclusive preparatory school, so I guess logic might not be a strong point.

AV isn't particularly difficult to understand. Personally, I think I'd prefer STV, but at least this is a step in the right direction.

comments: 0
So I Bought A BMW Z4
Saturday 12th February, 2011 23:57
I've only paid the deposit so far, but I should be picking up my new car on Saturday morning. My mum will probably think I'm foolish and reckless (I'm debating not telling her), but you only live once, and I'm viewing it as an early 30th birthday present. It's about time I treated myself. 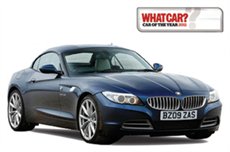 For more pics, try to imagine these in a nice dark blue, like in the photo above.

So why did I go for the BMW Z4 sDrive30i? It was the only car that's truly caught my attention over the last few weeks, and it ticked the right boxes in my list of requirements. I'm relatively happy with my Mondeo, but the main things I wanted for my next car were something: So how does the Z4 compare to my Mondeo? It's half a metre shorter, it's almost twice as fast. It's an 09 plate so it's 4 years newer (and if I stick a personalised number plate on it at some point, I'm sure I can talk work into letting me keep the Z4 for at least the next 5 years), and has only done just over 10000 miles.

As a bonus, the fuel consumption isn't too different to my Mondeo! The combined mpg is only 4 lower. The emissions aren't much higher either, falling into the same band of J, so even that'll cost exactly the same.

The Mondeo has a much bigger boot and can take more people, but I usually just have a backpack in the boot and I mostly drive by myself.

So I'm basically buying a car that's smaller, faster, newer, roughly the same running costs (although services will probably cost more, and insurance is understandably around twice the price). I gain leather, heated, adjustable (with memory) sport seats. I finally have parking sensors (front and rear). The (tiny) rear windows are electric instead of manual. It's also a really pretty car (the exact same specification would cost over £38k for a brand new version).

Sure, there are a lot of other cars I could have bought; but I don't think I'll ever regret my decision. Feel free to ask me in 2-3 years time.