reply
@RobNicholls81
Monday 31st December, 2012 16:15
I'd get in trouble with German friends for my last tweet, but they know I'm only joking. Germans are awesome. As are Swedes, Slovaks, Welsh.

reply
@RobNicholls81
Monday 31st December, 2012 12:37
February's edition of @GlamourMagUK looks a little bit thin (too many Christmas parties to attend?). But it does have @stonenobrien :D

reply
@RobNicholls81
Saturday 29th December, 2012 21:03
I won the lottery! Only £10, but that's still a win. Need to improve my consistency. #iknowitisrandom

reply
@RobNicholls81
Saturday 29th December, 2012 19:14
This is why Theo should be on the right wing and Giroud should be centre forward! Gibbs mistakes, but Koscielny playing well. 6-3. COYG.

reply
@RobNicholls81
Friday 28th December, 2012 00:01
#PitchPerfect was actually pretty good. If you think it's rubbish, you need a movication. #ISetFiresToFeelJoy

reply
@RobNicholls81
Tuesday 25th December, 2012 16:12
If Shrek was never born in Shrek Forever After, so he never saves Fiona, how did he sign the agreement with Rumplestiltskin?

reply
@RobNicholls81
Sunday 23rd December, 2012 13:25
Total Recall (2012) is a good science fiction movie if you can forget about science and the original fiction by PKD.

reply
@RobNicholls81
Friday 21st December, 2012 20:34
For a moment I thought Homeland had "jumped the shark", but crisis averted.

reply
Please Click Here
Wednesday 19th December, 2012 13:56
I received an email this afternoon that made me smile.

I assume they meant if I can't see the rest of the message, which was an image that wasn't automatically loaded (as it's located on a third party web server).

reply
@RobNicholls81
Sunday 16th December, 2012 02:26
Feels like the painkillers have finally kicked in, might be able to finally fall asleep tonight. Stupid teeth.

reply
@RobNicholls81
Friday 14th December, 2012 21:32
I suspect #HIGNFY would be much better with @richardosman every week (perhaps he could replace Paul Merton, or become a permanent host?).

reply
@RobNicholls81
Friday 14th December, 2012 14:01
New Facebook client on Android is soooo much nicer to use than the old HTML5 based version.

reply
Oh, That's Why
Wednesday 12th December, 2012 19:12
For the last few days a test server of mine has been playing up. The hardware is pretty much new (bought over the summer), so I was a bit surprised that it had played up/didn't always reboot properly. Copying files over the network was causing real problems. At first I thought it was a driver issue, especially as the problem got worse when upgrading the Atheros driver from 2.1.0.4 to 2.1.07 (and appeared to get better after upgrading to 2.1.0.12). But in reality, the Atheros NIC is attached to a Hyper-V virtual machine with a hard disk stored on the main disk; while file copying over the nice Intel NIC only involved the RAID volume. Because I built this test server over the summer, and because it doesn't do anything important, I didn't bother installing any hard disk monitoring tools. My bad. Especially when the disk has an uptime of over 4 years (it came from another array that I no longer use). It looks a little bit dead: 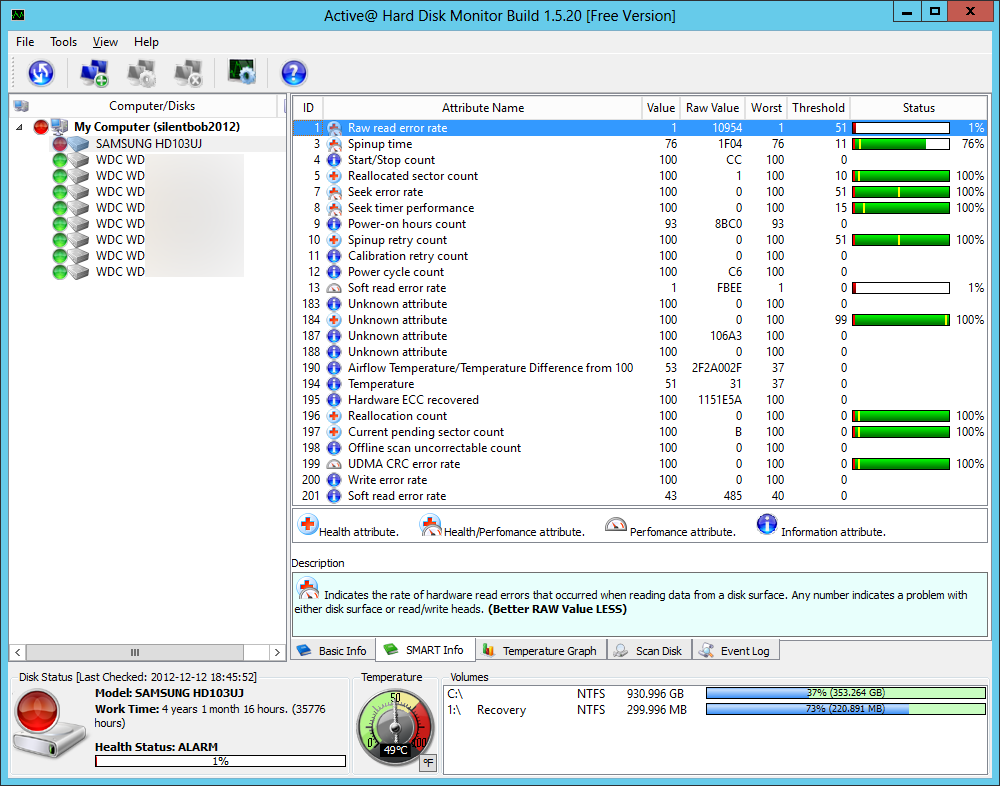 reply
Thoughts About Arsenal FC
Wednesday 12th December, 2012 12:31
Sorry about the long gap between posts, the last several weeks have flown by! Most of that was work related, although a few days was down to illness (it seems you can't work flat out for 2-3 months without any negative repercussions). On the plus side, two highly qualified and experienced pentesters have joined our team, so hopefully I won't have to work myself into the ground again for a few more years.

Sometimes you have to go through a painful period with limited resources before you come back with a vengeance. I can't see that happening for Arsenal, not after watching them play last night. A team full of internationals (an almost full strength team) were beaten by the League Two team Bradford City. Their players cost a fraction of Arsenal's team. The average League Two player earns £747 per week; the average wage of Arsenal's starting eleven is (allegedly) £59,914 per week. Only a couple of players last night seemed to show any real passion for Arsenal, and only one of them seemed to show any clear leadership (he's only 20 years old and isn't even a vice-captain).

Arsene blamed the performance on the pitch, calling it "a bit slippery", but that's no excuse for failing to comfortably beat their low calibre rivals last night. I can just about accept a goalless draw against Aston Villa on a wet pitch, but they're another Premier League team. Arsene refused to blame his players, and I honestly believe that many of them are excellent footballers, but something's not right. My gut feeling is that we're not making the best use of them. Arsene claimed that Arsenal "played with a very offensive team and for over an hour played with five strikers", but the reality is we don't have five strikers (the Arsenal website only lists 6 in the first team, and 2 of those were unable to play through injury!). We have a few players that can play up front, but none of them are proper/consistent strikers. The only person in the team that I'd call a proper striker is Giroud, and he was out injured. It's like we haven't learnt anything from last year - hoping that Robin van Persie would be fit so we could score goals. Then again, last year we had a fullback problem, and this year we again had to play Vermaelen out of position because we don't have an adequate replacement for Gibbs.

There's nothing wrong with playing people out of position, right? Wrong. Ramsey is not a proper striker (he's barely a midfielder, often losing posession or passing the ball to the opposition, and rarely passes the ball quickly). Podolski enjoyed success over in Germany as a centre forward, but is always played on the left (with players like Gervinho and Chamakh picked to play CF instead) and is often invisible. Gervinho shouldn't even be on the pitch due to his inconsistency and tendency to kick/run the ball out of play. Theo Walcott has improved his finishing, but he's always a shoulder barge away from being knocked onto the floor. Top strikers like Thierry Henry and Alan Shearer (or even top scoring midfielders like Frank Lampard) held their ground. Arteta is playing deeper than last season - he can play great passes, but now he's too far back to set up our strikers.

The January transfer window is coming up. Arsenal have money to spend (partly thanks to new sponsorship deals with Emirates, and maybe Adidas next season?). I think spending it will help, as our current squad has no real depth (forcing players to play every game and occasionally out of position). We don't have suitable replacements for Giroud or Gibbs (sorry Meade, but you're not good enough yet), and with a proper defensive midfielder we may be able to move Arteta forward slightly. We need a reliable goalkeeper to challenge Szczesny (and be a confident backup if he gets injured again).

We still have the problem of tactics though. We don't appear to have a Plan B. Ever. We pass it back, pass to the side, try the other wing, pass it back again. Or we try a (poor) cross even though Giroud (despite Gervinho's massive forehead) is the only striker capable of scoring with his head. Okay, so perhaps it's looking a bit better now Jack's back and happy to run at people, towards the box. Diaby is good at that, but is rarely fit.

Then there's team selection and formation. Jack Wilshere and Santi Cazorla are great players (when they're not injured/fatigued), but they can't/shouldn't play every match. I think we should have a proper defensive midfielder (either play Coquelin, or let him move on and bring in someone better), allowing Arteta to push up and rotate with Jack and Santi, or drop back if Coquelin needs a rest (or gets injured). I'd also consider arguing for a 4-4-2 instead of 4-3-3 formation (especially if that allows us to play Eisfeld or Gnabry more often). We could alternate between Giroud and Podolski on the left, and bring in a consistent right footed striker (e.g. Huntelaar? Zaha? Both?) to play two up front (and alternate Theo up there, or Oxlade-Chamberlain if he can improve his finishing?).

Who would I like to see in 2013? If we go with 4-4-2 I'd like (subs bench will depend on injuries, and starting eleven will need to rotate to avoid injuries):

This would involve selling most of the following (or letting their contracts expire):

If we do lose Sagna (and I hope we don't), then Jenkinson is already pretty good, but we would need a new signing as a backup (as I don't think we have any suitable right backs in the reserves). If we sell Theo, we need to get a solid replacement. Perhaps Arsene is trying to line one up before he sells Theo? I'd hate to be caught out like Liverpool have been so far this season.

reply
@RobNicholls81
Wednesday 12th December, 2012 08:14
"[We played] basically over an hour with five strikers basically, and couldn’t score." They're basically not strikers. Basically buy some.

reply
@RobNicholls81
Tuesday 11th December, 2012 21:31
Should have guessed. We could still win this (even though we don't really deserve it)! #AFC

reply
@RobNicholls81
Sunday 9th December, 2012 13:21
Why doesn't the model on the DKNY Delicious advert get arrested for stealing an apple (or damaging several others)?

reply
@RobNicholls81
Monday 3rd December, 2012 20:33
Will the next Star Trek movie be darker? Will the bad guy be British? Importantly, will there be less lens flare? http://t.co/OAhGvGBX