My guess would be it "got out" after it premiered in Australia on ABC1 on Wednesday, December 3. And then they act surprised when it ends up on YouTube before Christmas. I'm mostly surprised that a low quality version was uploaded to YouTube, seeing as it was a PDTV broadcast that appears to be widely available over the internet. Although, for obvious reasons, I suggest you watch it on BBC One rather than illegally downloading it. If you can wait until March, you can buy it on DVD too.

comments: 0
Bank Of England
Wednesday 10th December, 2008 17:03
I figured out why they've made another aggressive rate change (actually, I figured it out a few days ago, but have been too busy to write it up until now). Here's the graph from the BBC News website:

And here it is when you rotate it sideways by 90 degrees: 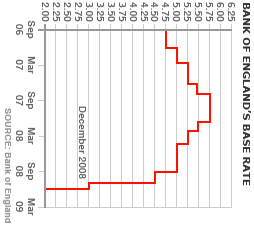 Is it just me, or does it look a lot like a breast? Okay, maybe it's just me.

Nmap Network Scanning is the official guide to the Nmap Security Scanner, a free and open source utility used by millions of people for network discovery, administration, and security auditing. From explaining port scanning basics for novices to detailing low-level packet crafting methods used by advanced hackers, this book by Nmap's original author suits all levels of security and networking professionals. The reference guide documents every Nmap feature and option, while the remainder demonstrates how to apply them to quickly solve real-world tasks. Examples and diagrams show actual communication on the wire. Topics include subverting firewalls and intrusion detection systems, optimizing Nmap performance, and automating common networking tasks with the Nmap Scripting Engine

My favourite sentence from Fyodor's email to the nmap-dev mailing list has to be: Imagine your loved one's surprise when she (or he) finds nearly 500 pages of port scanning bliss in her stocking!

They're out of stock now, but apparently you can get it from Amazon (or Amazon UK), as well as several other online stores.

If you're not sure you want to spend your money on this (essential?) book, you can read half of it for free right here.

I'll let you know what I think of it once I've read the whole thing, although I'm sure my opinion will be slightly biased as I do like Nmap and I think Fyodor's a really nice guy (if you haven't seen his hilarious - if you're a geek - speech from this year's Defcon/Black Hat talk, check it out here). I hope my copy turns up so I can read it over Christmas!

comments: 0
Damn Thank You Netgear
Tuesday 2nd December, 2008 09:43
My Netgear wireless card supports Vista as of the version 2.0 drivers. They claim to support Vista x86 and x64. Given that Server 2008 is practically identical to Vista x64 SP1 (same codebase, same build number), why doesn't my wireless card work on 2008? It seems to crash due to a missing DLL, and after copying it across from the x86 machine to the right location for x64 I no longer get the crashes, but it doesn't launch the wizard, and although the card now uses a Marvell driver (I think it's the correct one) it's unable to see any networks to connect to. I'm wondering if they've taken out wireless support for Server 2008? This would be a pain, as it means I'll probably have to run a cable down the stairs (which Cheryl isn't keen on) until we put some holes in walls to wire the house up (which probably won't happen anytime soon). So I might have to turn the fileserver off :( (unless I can do something clever with the wireless card and my PC, but that might mean leaving 3 computers on all day).

In better news, at least both arrays were fine after I turned on the computer. Considering how I rewired, moved disks and transported it from my flat to its new home, I'm a bit surprised it's okay. The PSU fans are definitely knackered though, so I'll order a new PSU today. The hard disks are a little noisy too, but there's not much more I can do about that (I've put a towel under the wheels of the server to dampen the vibration).

comments: 0
ATI Drivers Suck
Monday 1st December, 2008 09:25
A little while back, I bought an Asus graphics card for an old computer in an attempt to build a cheap HTPC. It works pretty well, but for some reason H.264 content stutters if I try and use SPDIF passthrough; if I use the HDMI output (using the yellow DVI-HDMI adaptor) then it all works fine in stereo out of the TV. I figured it was a CPU usage issue, as H.264 content kills the CPU with ffdshow, but just about copes okay with CoreAVC (yes, I have paid for it!). I decided to hook up my main computer to the TV, mostly to see what it's like to play World of Warcraft on a large TV screen. My main machine is fairly powerful and has never had any issues playing H.264 content with AC3 audio (or even re-encoding DTS to AC3 on the fly!). I have a similar graphics card in the main machine (Sapphire 3870) compared to the HTPC (Asus 3650), so I figured I could hook up the DVI-HDMI adaptor and play World of Warcraft's audio through the HDMI cable to the TV (note: this works fine on the HTPC, which appears to have an Asus customised version of old Catalyst drivers - even after hacking the newer Catalyst files I wasn't able to install newer Catalyst drivers). No sound. I do a bit of searching and it seems I need to replace Vista's default Microsoft driver with the proper ATI HDMI driver (from Realtek). Now it tells me that I don't have a cable plugged in. A bit more searching with Google suggests that it used to work in the old 8.2 Catalyst drivers, but ATI broke something in 8.3 and have never fixed it. Once the HTPC gets its big upgrade (new case, new motherboard, new CPU, new graphics card, new RAM), it probably won't be an issue anymore for me, but it'll still be an issue for others. I hope ATI sorts this out soon, it's a really useful feature to pass audio through the HDMI connector, and the card is capable of doing it.

I used to love that ATI seemed to be a bit cooler and cheaper, but I've got issues in Vista with anything other than RGB output (others display the top pixel at the bottom and left pixel on the right edge, and vice versa, when trying to play videos), and now I've spotted the HDMI problem. I have no real loyalty when it comes to graphics cards, I'm still keeping an eye on NVIDIA (I keep going back to them when they make a good card, and I dont think I've ever been disappointed).